June is the one-year anniversary of the publication of my first manuscript, Army of God, a story focusing on a defense of Noah’s Ark by the animals. To commemorate the launch, I thought I’d give you a glimpse into the research that went into writing the novel. Despite the risks of dealing with such an iconic theme, there were two goals that I tried to keep in mind while I researched and wrote.

Even though the book is a work of fiction, I took great care to ensure it remained faithful to the Bible. As with any story, I not only had to come up with the dramatic elements, but had to make certain even those came through as real and accurate as possible.

Of course, my story begins and ends with Biblical narrative of the flood as described in the book of Genesis, Chapters 6-9. As you know, few details are provided about the character of Noah, other than the fact that he “was a just man, perfect in his generations,” and even less about the remaining seven members of his family. None of the women is identified by name, including Noah’s wife, only his three sons. And that brings me to my second goal for the writing, which was to bring to life these eight people to whom the world has always wondered. Not only by name, but through careful development of their respective characters.

In addition to the Holy Bible, I turned to several ancient Hebrew texts to provide supplemental historical information. Of particular usefulness were the writings of Josephus, the Jewish historian whose work, Antiquities of the Jews, is thought to be one of the most reliable non-Biblical accounts of the history of the world from a Jewish perspective. Chapter 3 of that work provides significant ancillary details about Noah and the flood not found in the Genesis story.

For purposes of plot, I’d decided to set my story in Eden, that unknown region of Mesopotamia first identified in Genesis 2. Most people, when they think of Eden, associate it with the famous garden first occupied by Adam and Eve. But in reality, Eden was a much larger area geographically. It included the land of Nod, that portion of territory to the east where Cain fled from the face of God after killing his brother. And while the Garden of Eden didn’t survive the flood, Mesopotamia and the Euphrates and Tigris Rivers did, thus providing the modern day reader with some familiar landmarks with which to orient themselves.

Naturally, the desire to maintain authenticity with the period being written about is the goal of any writer of historical fiction. Army of God presented numerous challenges in this regard, but three in-particular come to mind: time, food, and dialogue.

Since “seconds” and “minutes” are not used as a Hebrew unit of measurement in the Bible, equivalents were taken from the Talmudic period in order to make the depictions of time more authentic (18 parts = 1 minute; 1 part =3.3 seconds). For scenes where food was consumed, it was important to remember that Noah and his family were vegetarians. God hadn’t yet given them meat to eat, a blessing that wasn’t bestowed until after the flood. As for the dialogue, these exchanges were written in a Biblical style patterned after the diction used by early Old Testament characters Abraham and Moses. As is the case with most first drafts, the manuscript was filled with contemporary references and phrases. Thankfully, my writing mentor and editor caught most of these.

During the writing, I learned a very hard, but valuable lesson regarding authenticity: Double-check your facts before committing them to paper. Somehow, I had made the erroneous assumption that Shem was the youngest of the three of Noah’s sons, a mistake I didn’t discover until the novel was nearly completed. I don’t know where I had gotten this from, but it certainly wasn’t from the Scriptures, which makes it clear that Ham was the youngest, Shem the middle, and Japeth the oldest of the siblings. Because I had already developed my characters, I spent several weeks rewriting large sections of story and redrawing personalities to coincide with the actual birth order. It was a nightmare, and one I vowed never to repeat.

Now, it’s your turn. Where do you think Noah lived before the flood? Do you agree with my decision to make Eden the setting for my story? Given the present day location of the Euphrates and Tigris rivers (modern day Iraq), where do you think the Garden of Eden was located. Let’s start a dialogue

Who is Dennis Bailey and Why Should I Care?

Welcome.
Since I know there are literally thousands of web and blog sites out there, I’d like to thank you for taking the time to visit mine. I assume that if you’re reading this, it’s because you want to know something more about me and my life as an author. Despite the mystique surrounding the art of writing, there is nothing mysterious about being a writer. I’m a husband, father, and retired police detective. And like so many others who have made writing a second career, I pull from experiences in my former occupation to help develop characters for my stories.

Above that, I’m a passionate lover of the Word of God. My first novel, Army of God, is taken from the book of Genesis and tells the story of how the animals of Noah’s Ark rose up to defend it against an invading army. 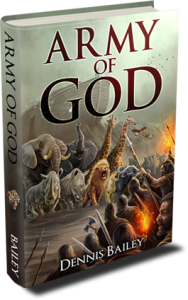 Why Should You Care?
So now that you know a little something about me, you may be asking yourself, “Why should I care?” What makes this guy different from the thousands of other authors (some of whom are also ex-cops) out there? Hopefully, it’s because I seek to focus on you the reader rather than me the writer. To begin with, though I may draw on my experience in understanding the perverse criminal mind from my days as a police investigator, I don’t write police stories. I write adventure stories. Big, sweeping epics and apocalyptic thrillers based on historical events, many of which originate, or are at least influenced by the Scriptural record. Stories that get your heart pounding–stories filled with action, suspense, and a touch of romance thrown in for good measure. Army of God is one such title, the first of my novels to employ this tried and true formula.

My goal, as I know it is with every writer, is to reach you on an emotional level, to not only leave you entertained, but also feeling exhilarated, enthralled, and inspired by the reading experience. Maybe even exhausted. I know there are many other things you can do with the 13 hours it takes the average person to read a 400-page novel. I would be honored to learn you had chosen to spend that time lost in a story of mine.

While you’re here, I hope you’ll take the opportunity to sign up for my newsletter. This is where I’ll provide news and information on the publication progress and audience reception of Army of God, as well as announcements about forthcoming titles. And don’t forget to leave your thoughts and questions in the comments section below.

I look forward to hearing from you.